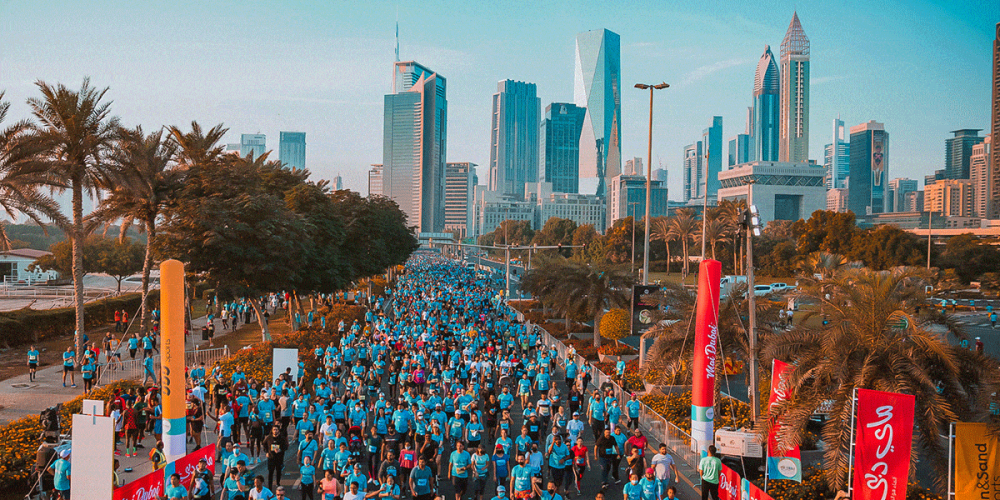 Dubai Run has become the largest fun run in the world. It is because of all those in Dubai who’ve come together for fitness and fun. On the 20th of this November, as the sun rose, the city turned neon green as runners took to the streets in official Dubai Run t-shirts to run by many of the city’s icons.

Among the thousands of participants of Dubai Run 2022, Sheikh Hamdan bin Mohammed, Crown Prince of Dubai, was the most prominent personality who led the race with a group of friends. The event is a key component of the Dubai Fitness Challenge, an initiative led by the Crown Prince.

More than 193,000 people took to the roads between 6.30 am and 10 am for the fourth year of what has become one of the world’s biggest free fun runs. Last year, more than 146,000 runners, joggers, wheelchair users, and walkers participated in the event. as a part of Dubai Fitness Challenge’s mission to encourage people to become more active, the event was open to people of all abilities and fitness levels.

The 10km route, for the more experienced runner, followed Sheikh Zayed Road to Dubai Canal before turning towards World Trade Centre and ending on Al Mustaqbal Street near the Dubai International Financial Centre. The 5km route was the way to go due to its flat terrain, which made it ideal for runners of every level. It began near the Museum of the Future, passing through Burj Khalifa and Dubai Opera ended near The Dubai Mall.

It’s important to note that Dubai Run is not a race but an ideal opportunity to take action to improve your health, get together with family and friends, and uniquely enjoy the city.

Feel free to walk, jog or run the distance.

Other posts about Running Events

Are you passionate about running? Don’t miss the opportunity of taking part in VIP Running Challenge on 5 March 2022. Read more about the event on our website.

What a great moment to enjoy the fresh weather! February 12th will be the day that citizens and tourists will be able to walk, run or sprint the event produced by none other than Super Sports.

RAK Half Marathon Returning to UAE In 2021

RAK Marathon 2021 | The big event that always brings together elite athletes from around the world will take place on 19th February 2021.

View all posts by Daniya Ahmad →

Al Hisn is a popular area in Abu Dhabi that lies on the northern side of the capital city. The distr

With the Football World Cup on the horizon, the focus of football lovers is firmly on international

Al Bahia is a residential area on the outskirts of Abu Dhabi. Also identified as New Bahia or Lower

<
>
Top
This site uses cookies for certain analytics, targeting and personalization purposes. View our Privacy and Cookie Policy to learn more about the cookies we use and how to can set your own preferences, including to disable them. By clicking “OK” or continuing to use this site you are consenting to our use of cookies, unless you have disabled them.
OK